Home » Blog » Blog » Bribery is bad, unless it involves cake…

A good few years ago another police officer and I were on duty as part of a specialist public order unit patrolling a high-profile event, which was mainly attended by extremely wealthy and very arrogant people on a week-long bender of booze and was renowned for erupting into huge drunken brawls. Which was jolly exciting and heaps of fun.

But anywho – one night, me and my copper chum, Al – one of the nicest people I have ever met – were mooching about, as you do, when we were called to the site security office to see a guy sitting in a chair in the middle of the room flanked by two huge security guys. Everyone was breathing hard with clothing slightly askew and we could see the guy clearly wasn’t happy at having been detained.
The security guys then explained they’d seen the guy doing naughty things with naughty powders.

Al nicked the guy, and all we had to do was walk him out to a waiting van which would take the naughty chap to a police station where clever investigator type folk would crack on and ask him many questions.
But the guy knew this. He knew what was coming. And it couldn’t happen. Not to him. “You don’t know who I am…I cannot be arrested for drugs…” and with a look of entitled arrogance etched upon his face he sneered at everyone in the room. Two coppers. Two security. One woman at the CCTV controls, and he says,
“I’ll give you each twenty grand tonight if you let me go…”

And there followed one second where we all just stared at him before bursting out laughing. Seriously. It was brilliant. Twenty grand, when you’re broke, which we all were, is a huge sum of money – but stuff that. Not a hope in hell pal, and the look on his face when we laughed was priceless. It still makes me chuckle now.
It was the honour you see. We had honour, and he didn’t. Oh, he had money, and no doubt prestige and power and entitlement. And yeah, for sure, his was a life of luxury. But that perception of power shifted right at that point and he was suddenly just an arrogant man not getting his own way. He wasn’t hurt or beaten up. We didn’t abuse him. We just laughed, and in a way, to a man like that, that was so much worse.

But the reason that memory came back this week was because I received an email from a reader asking how they could buy a signed book. I get them a lot. And people asking where they can get merchandise for The Undead, or Extracted, or now for the Worldship Humility.
It’s lovely getting those emails. I adore them, but I don’t merchandise or sell signed books. I know a lot of writers do, and it might be something I look at in the future, but I just don’t have the time to set it up right now, and I am wayyyyyy too bone idle to go and suffer the ordeal by post-office any more than I have to.
WHAT’S IN THE BOX? SPEAK UP! THE PEOPLE OUTSIDE IN THE HIGH STREET CAN’T HEAR YOU.

The reason I thought about the memory was that one of the reader emails jokingly offered bribes and inducements for a signed book. Which firstly reminded me of that story, and then made me think that actually, and for a signed book – I am sooooo open to bribery. Seriously. Like oh my golly gosh. I won’t sell the stuff, but for goodies, yeah baby!

With that in mind. Here is a list of things that may, or may not, get you a signed book, or some other goodies. 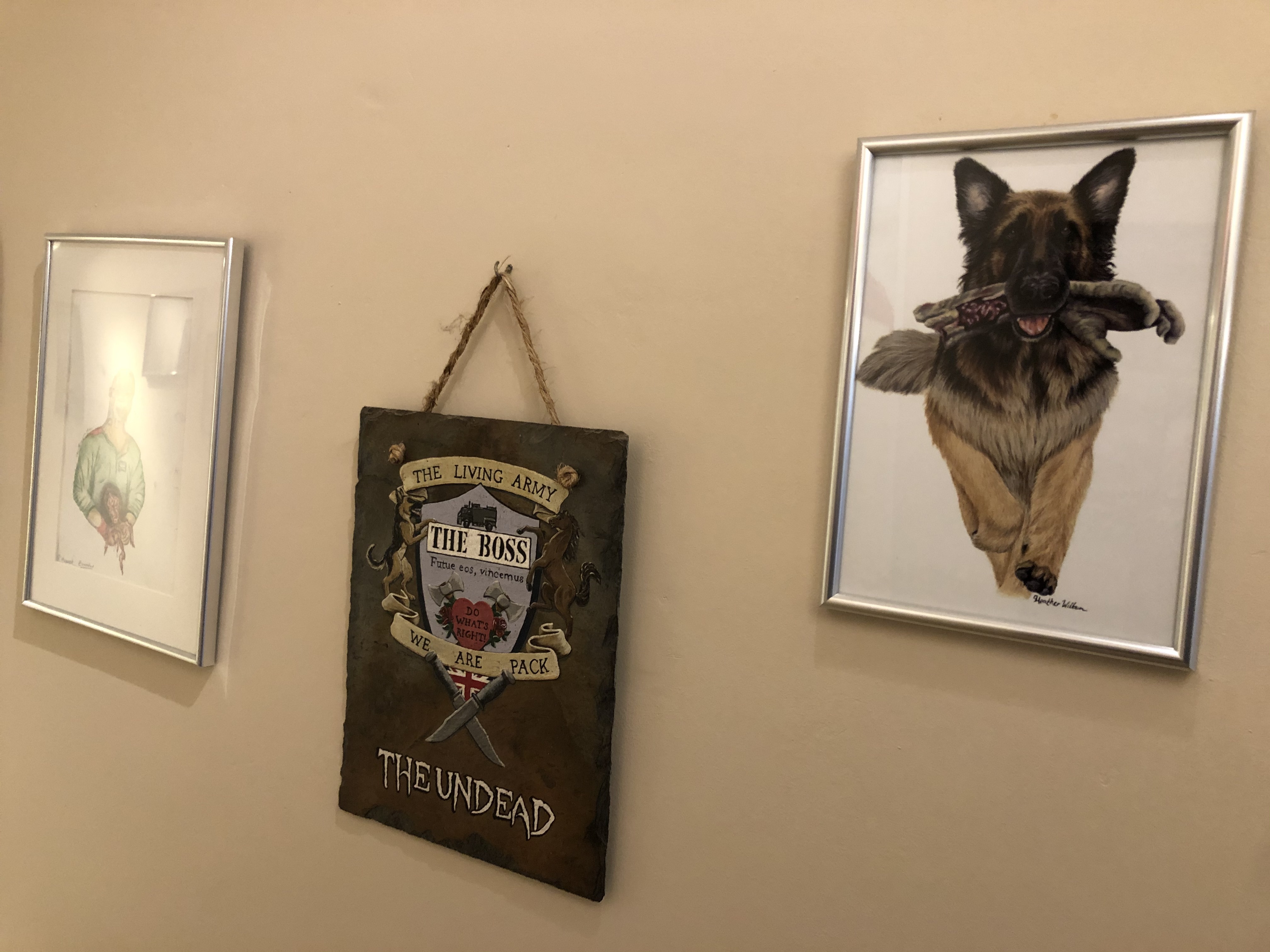 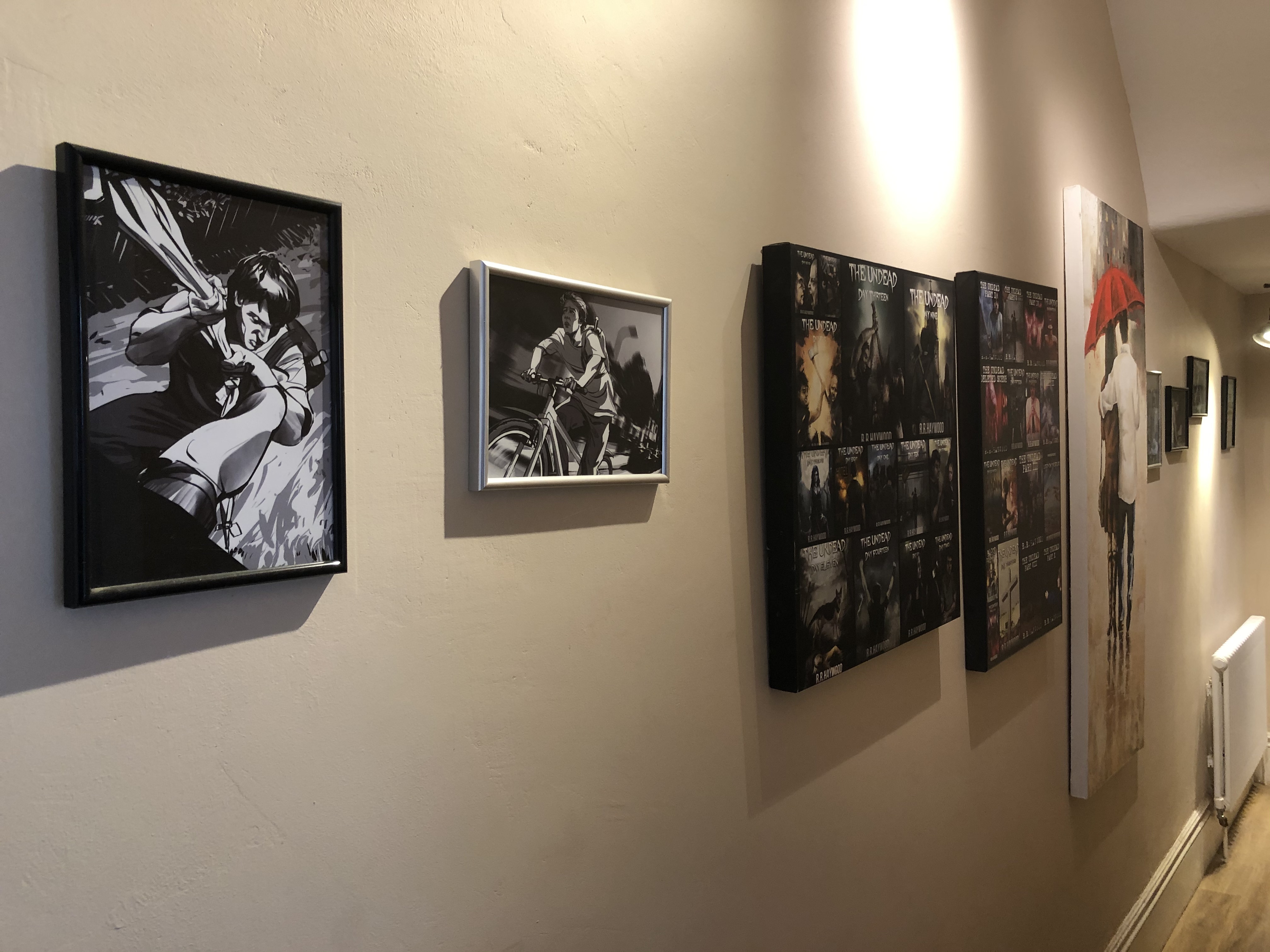 Just email in to info@rrhaywood.com where my super assistant will get super cross and call me a dick for trying to blag goodies.

This year has also been super busy too! Extracted was translated into complex Chinese: 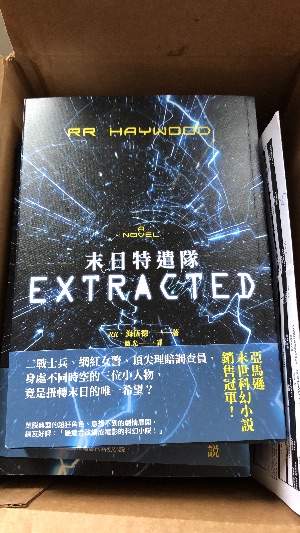 And The Worldship Humility audio was translated into French: 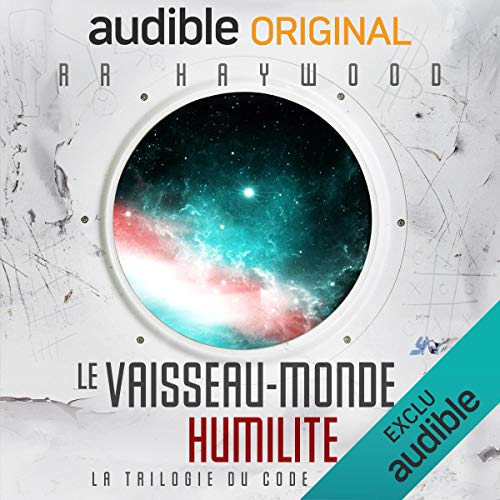 Which is just nuts! I think Extracted might also be getting translated into simple Chinese, and possibly also another language, but I can’t remember what it is. I want to say Taiwan, but I’m probably wrong.

The Worldship Humility has done brilliantly on Audible and I think has shifted ten times more copies than we thought it would. Colin Morgan’s narration is epic. What a talented and super lovely guy.

The Undead is still growing and the reviews on the latest episode – 24: Equilibrium – have been outstanding. Thank you so much! I also did a short story for The Undead – The Camping Shop, which went out this year.
AMAZON UK
AMAZON US
The Camping Shop was actually written as a way of teaching myself to adapt a story to a script and creative treatment, which is a skill I hope to need for future projects.

The audio and written series of The Undead are now completely caught up with each other. They’re just titled differently due to the way Audible packaged them. The Undead Part 20 audio is The Undead 24 written book.

I’m working on Book Two of The Worldship Humility at the mo, as yet untitled. I know a lot of people are expecting the next episode of The Undead, and I will get to it as soon as I can. The Undead will definitely continue! I’ve already got the next story in mind.

The other thing I have been doing is feeding this little guy. A handsome dog-fox that comes into my garden every night for supper. 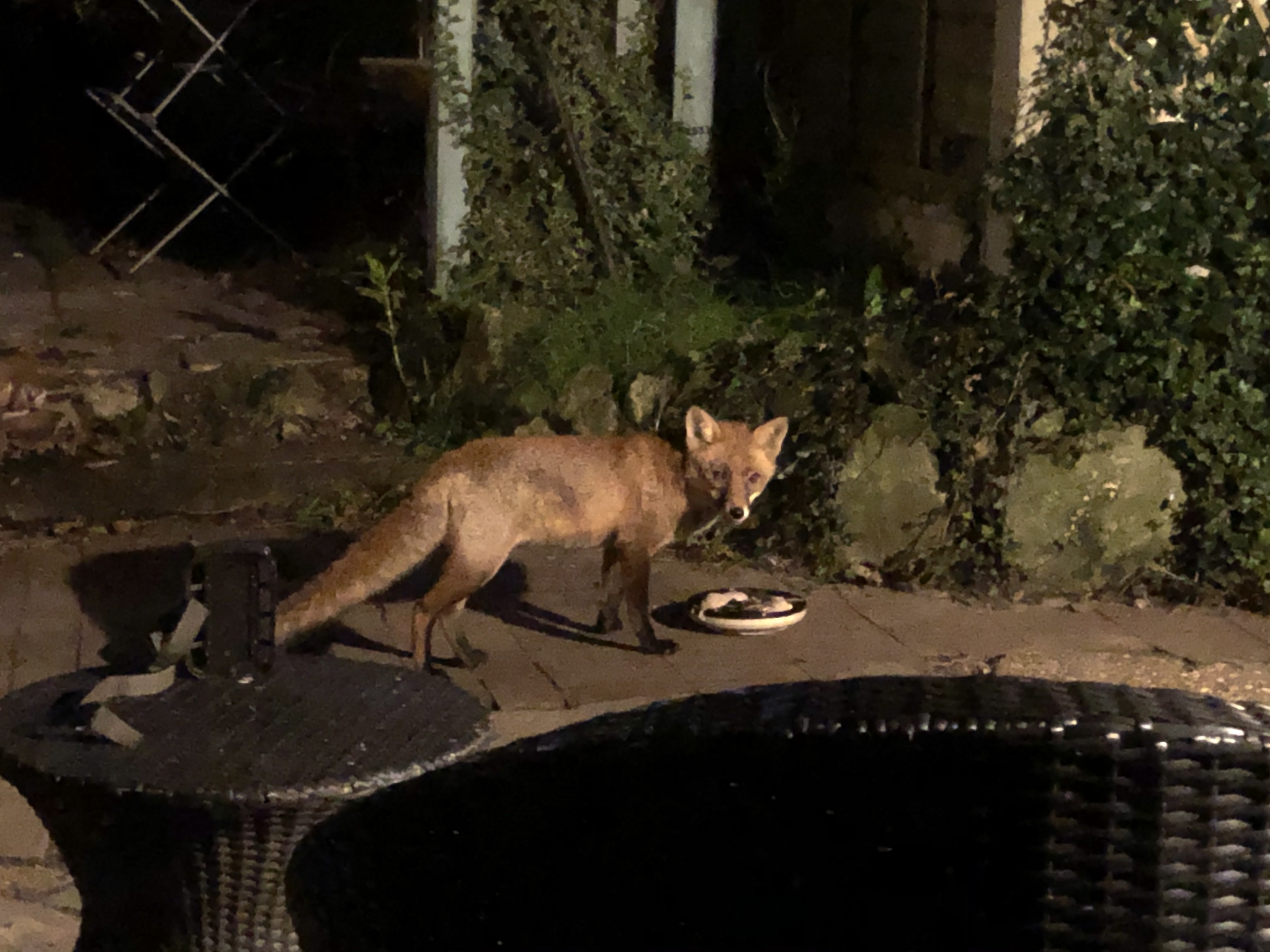 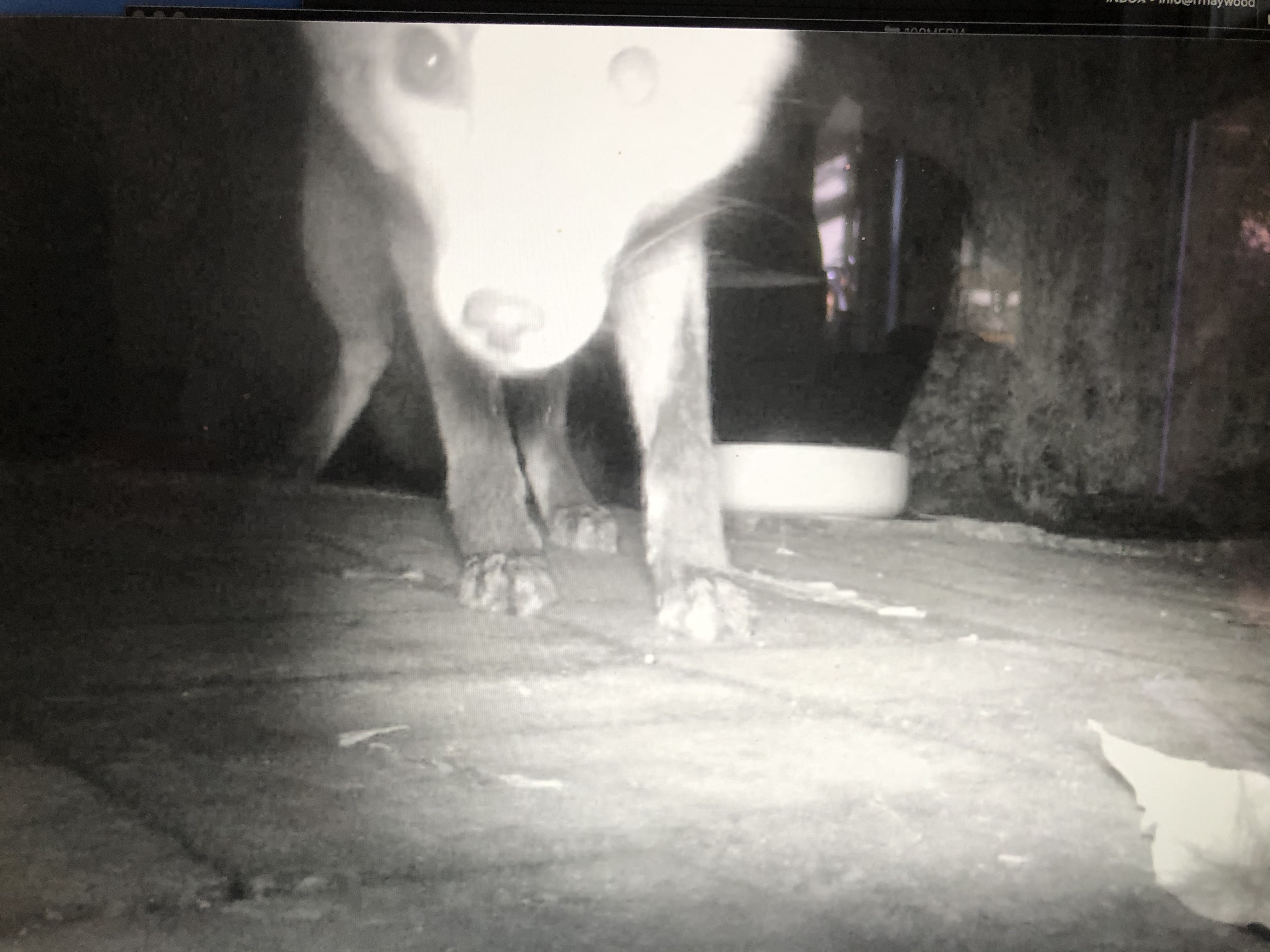 He even brought his pal along one night…

Righto. I’ll sign off and go do writing things with words and stuff.
Thank you so much for subscribing to my mailing list, and for your truly gorgeous support and amazing reviews.
Much love!
Rich

8 thoughts on “Bribery is bad, unless it involves cake…”

The Worldship Humility is out on Kindle + Paperback!!